Lessons From An Exotic Past

It is 6 pm and I am sitting with the South American ambassador for my monthly dinner. Once a month he invites me without my parents. I am 8 years old and the Cairo community smiles indulgently. He misses his kids is the word around town.

So “my little one” he says with a warm smile. “What have you heard this week?” The reality is that the ambassador discovered the previous year that I visit many of society’s children. Following our escape from Hungary, my parents were invited to Egypt by King Farouk so invitations are not in short supply. Each household  has a staff in excess of 30 – governesses, butlers, cooks, maids etc – and they do chatter about what goes on in other households. I love gossip so listen attentively and often share with the ambassador some of the choice tidbits. Tonight, I tell him the story of a party given the previous week by another recently arrived ambassador. The man hired the king’s cook as caterer, thinking only of his expertise. The king crashed the party at 11 PM – as he often did – only to discover that the guests were using the palace china, silver and food provided by his cook. In a fit of rage, he began throwing plates against the wall and everyone took quick cover in adjoining rooms. The ambassador howls with laughter hearing this, as does the serving staff of 3 – so much so, that food from the platters is dripping on the embassy floor!

15 years later I am in Paris working for Coca Cola and representing the firm at a cocktail party. My host says “there is a man charging across the room who wants to talk to you.” I turn around and there is the ambassador whom I have not seen since we made a quick political exit from Cairo 14 years before. “Shoya,” he says with a huge grin. “I have been looking for you for years. I so wanted to tell, you saved my career!” The ambassador, it turns out, had hired the same caterer to do his coming out party the week after our dinner, and promptly cancelled him the following day.

Lesson learned. Always pay attention to those below you. Often they have information that your peers and superiors do not.

Hungarian born Geraldine, was a cousin of enduring charm and beauty.  King Zog of Albania saw her photo when she was 20 and invited her to visit his country.  She arrived with her chaperones and, as he had hoped, fell in love.  Their wedding was triumphant. 50,000 children in native costumes sang and applauded.  The plot however turned.  Less than a year later, still bleeding from the birth of her son, she was carried to a vehicle on a mattress and the couple escaped from the Italian invaders.  She, the king and his entourage began an odyssey that would ultimately land them in Egypt at the invitation of King Farouk.  It was there that I met her as a small child and was privileged to visit her in Alexandria each summer for the next 6 years.

Later we went our separate ways.  My family emigrated to the US and she ultimately went to  Spain after her husband passed away.  Much to my surprise she contacted me after my US college graduation and asked whether I would be interested in joining her as a lady in waiting in Madrid.  I spent a memorable year with her and remember well the many lessons she taught her “ladies” to help strengthen her position in Madrid.

Things were complicated by the presence of several colonels who, under the direction of her son Crown Prince Leka, were training young Albanians in the family’s compound.  Leka was hoping to launch a coup to regain his throne.  Needless to say, neighbors in the fashionable neighborhood were not amused.  Yet the Queen continued to be invited to social events most evenings of the week.  Before each event we gathered to discuss the guests and strategies to solidify her relationship with the community.  Her tips remains among the best, and have served me well ever since.  I have simplified them into 3 networking steps described below:

1. Observe & listen. What clues are provided by the individual’s speech tempo and eye contact.  Are they more outgoing or reserved and how much do they want to reveal about themselves?  Follow their lead and adapt your response accordingly.  Most of all, nod and smile frequently.
2. Ask questions: First determine from #1 how much personal information the person wants to reveal.  Then ask questions that will provide more information about their interests, activities, feelings and concerns.  Most of all, don’t interrupt.  Let them talk.
3. Reveal key things about yourself that will make you memorable.  Based on #2, you can now tell them a few interesting things about yourself that will help them remember you after the evening is over.  These will differ depending on answers to the previous steps.

We practiced good openers, how to ask questions and what to reveal.  After the event we gathered to share the information received.  Over the coming months these tips made the evenings fun, informative and, most importantly, solidified her position among the ruling class of Madrid.

Turbulent years followed, but in 2002 Queen Geraldine, along with her son and grandson , was invited by Parliament back to Albania to live.  She died at the age of 87 and was buried with full honors .  Who would have thought?  Targeted networking does work! 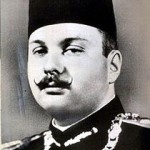 On a hot, humid evening in Alexandria, the dinner party rises from the table.  Egypt in those days was a magnet for royalty in exile. On this particular evening, King Zog, the last ruler of Albania, is hosting dinner for Egypt’s ruler King Farouk, the Queen of Bulgaria and several members of the Italian royal family in exile.

King Zog is married to my cousin, Hungarian-born Queen Geraldine, hence my attendance. At six I am fully prepped for the guests and keep my mouth shut. That is fine, however, since Zog, a thoughtful man, joined me in the palace gardens several hours earlier to chitchat. He asked about the ups and downs of my life in Cairo and injected some gentle humor. A calm and kind man, he made people of all ages feel special.

Tonight the guests are departing early knowing that Farouk is eager to play cards with Zog.  During the summer months, Farouk arrives unannounced at least once a week to gamble.  Zog adapts to these visits with grace knowing he is under the protection of the Egyptian monarchy.

I start moving towards the door with my parents to head up to our room.  All of sudden Farouk turns to me smiling and says “the little one will sit next to me and bring me luck.” While there are less attractive sides to the king, he is kind to children and has a sense of humor, so I join him willingly. For the first hour, I watch him play and we grin at each other as he rakes in the coins. Then I stretch out over his ample lap and fall asleep. Sometime in the wee hours of the morning, he gently shakes me. “We have done well, ma petite,” he whispers in French, “now you will share my earnings.”  I hold up my white pinafore and he fills it with mountains of bills and coins — the equivalent of several thousand pounds (1 pound in those days was worth about US $5). I thank him and head out trying to keep the dozens of menservants standing in the hallway from dipping their hands into my bounty.  Upstairs, my parents stare at the pile in shocked amazement. The funds will keep us afloat for a number of months!!  As Hungarian refugees who arrived several years earlier, life in exile is interesting but not always easy. More details will follow in future blogposts.

LESSON LEARNED:  It’s not who you know, but how you get to know the person that produces dramatic results — especially if you are six years old and you fall asleep on the King’s lap.